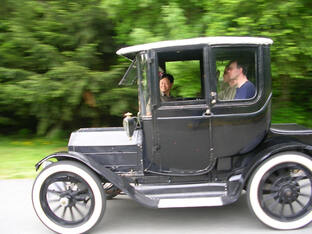 GOING THE DISTANCE (Past, Present and Very Near Future)

Before the turn of the century, funky automobiles were beginning their mission to replace horses, bikes and walking for transportation.   In the US by 1912, 40 percent of automobiles were powered by steam, 38 percent by electricity, and 22 percent by gasoline (https://en.wikipedia.org/wiki/History_of_the_electric_vehicle).  One of the early electric cars was The Detroit.  It was made from 1907 to 1939 and the average cost under $2,500.  It has a tiller instead of a steering wheel, 3 foot pedals and a four sided glass cabin that was tall enough for a gentleman to wear his to hat while driving (https://www.hemmings.com/blog/article/1918-detroit-electric/).  It went 32 km/hour and could go 130 km between charges.   We had one on display at the 2018 REVolutionSS event last June and I enjoyed a bumpy if not somewhat scary ride across the field of the Farmers Institute.


Gradually the Internal Combustion Engines fuelled by gasoline became increasingly the most popular with a highway system, cheap and widely available fuel, electric starting motors and mufflers and finally, the cost advantages created by mass production.   They took the stage while the steam and EV units faded away.

For EV’s, a large issue was the batteries which at the time, needed infrastructure, long charging times and did not perform well in cold temperature.  They could not compete with gasoline.  By mid-century more strategic needs like a space race (think satellites and a Moon Rover) energized the requirement for more advanced battery technology.  As the years sped by, even better batteries were needed for ever more powerful personal computing devices (laptops and smart phones).

An increasing awareness of environmental concerns in combination with improved batteries made the EV (and E-bikes) practical.  The Nissan Leaf entered the scene in 2011.  It cost $32,780 US, went up to 140 km/hour, and had a similar range to the Detroit of 130 km (although it weighed over a ton more).  It had a 24 kwh (kilowatt hours) battery which was totally fine for city commuting and with some planning, cross country ventures.  It was a great start but it sparked the Nissan battery innovators to charge ahead and do even better.  In 2016, the battery was upgraded to 30 kwh, in 2018, 40 kwh and optionally a 62 kwh in 2019, providing an available range of 360 km.

Other manufacturers were in the range game as well.  In 2018, we saw the arrival of the Chevrolet Bolt with a 383 km range.  This year, 4 additional longer range vehicles popped up, the new Kia Soul EV and Kia e-Niro (both 388 km), the Hyundai Kona (413 km) and Tesla Model 3 long range version (523 km).


The very near future

As an EV focussed dude, I access the media on a daily basis.  Almost every automotive manufacturer is joining the EV movement providing greater competition, new formats and especially for Salt Spring Island, trucks.  And virtually every other field of transportation is driving down the road to electric.  Our own Salt Spring Air is promising test flights of an electric de Havilland Beaver by late 2019.  Often mentioned are helicopters, ocean shipping, boats, ferries (sorry - only in Norway, pity).   There are 400,000 electric buses in operation in China.

Leading the innovation path is Elon Musk.  The naysayers never expected the success of SpaceX, Tesla Gigafactory and the $35,000 US Tesla Model 3.  He tends to be always late with his dream delivery but eventually knocks that darn dream out of the park.  He recently announced that his next version of the Tesla roadster would have a 200 kwh battery and on a single charge, travel 1,000 km (Vancouver to Calgary).  He is also forecasting achieving 1,000,000 miles of use on an EV battery.  That ball is getting its skin ripped off.

I encourage your respectful comments.   I can be reached at  jstanden@ucalgary.ca