I am having a lot of fun driving my Tesla Model Y - FSD beta 69.2.2 around our narrow, rural, forested, twisty roads on Salt Spring Island.  We also feature an abundance of weird angled intersections.

The absence of center lines and edge lines is pretty much the norm.  However, when the center lines are painted, obviously important to FSD, I am puzzled.

Example #1. There are two entrances to our Country Grocer Complex just north of the hamlet of Ganges.
The road is a busy one for our island.  Both entrances are entered from either direction and are heavily used.  Both enter the core of the malls parking area.  Neither are an intersection (ie. a road entering from across the street).

How will FSD resolve crossing the intersection in the right photo, when it has to cross a double yellow line ?  (it would be very messy if everybody had to use the single entrance).
​
Example #2.  In the photo below, driving North up Sunset and turning left onto Monteith, the yellow line appears to be placed correctly.  But, the smooth entrance to Monteith is to cut across the line.  That is what everybody does.  FSD reads the line and will not cross it during the turn, so it drives too far and then abruptly changes course to make the turn.  I have uploaded the video to Tesla a few times. 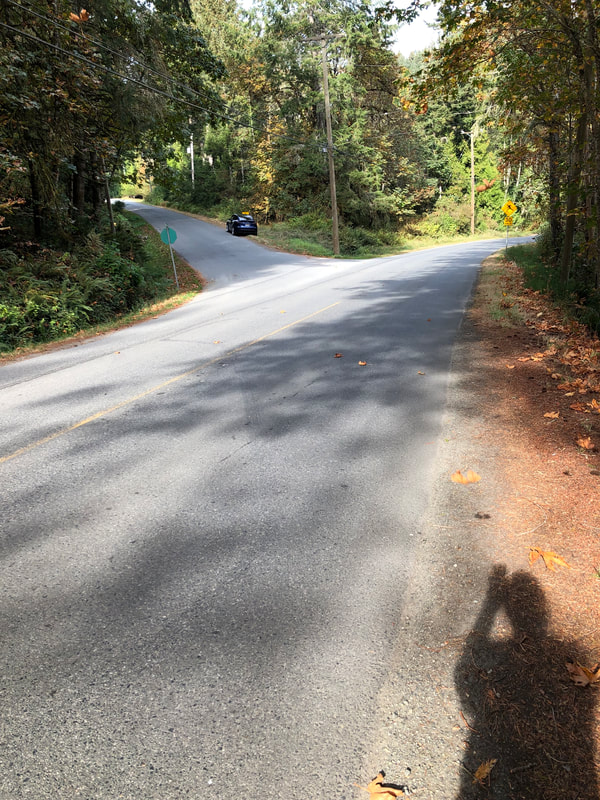 I am curious about how important the yellow center lines are to the FSD driving software.  Obviously, for driving and staying in a lane, very important.

But as in the previous example, at intersections of entering/leaving parking areas, I am curious if the car will cross single or double lines if required to maximize the smoothness. If not then where the lines end at those intersections will be crucial.

Wondering about that I grabbed my camera and went out to check the painting process.  We have had some line painting recently and I observed that there are white start/end markers that I believe are measured very precisely in advance to indicate where the yellow center lines should start and end when painted.  But what I observed, is the following final painting was very much less than accurate.  I have provided some examples.
These less accurate lines may not matter for us human drivers.  But I wonder if it could be problematic for FSD ?

Note: many if not most roads on SSI (and there are a lot), do not have center lines.  Lots of reasons why, including paving budgets, but one reason I am told, is the roads are not wide enough to legally qualify).  And only some with center lines are repainted every year.  It does make for interesting driving though.


​Victoria​
​
FSD tester and videographer, Grey Tesla Victoria, has reported a problem of an intersection his Tesla will not cross over center lines to enter.  Photos below.  Here is a video demonstration: https://www.youtube.com/watch?v=Eg-gTihRzlk&t=13s.  Please consider supporting his channel by subscribing.